For Real?? Is the pink ribbon pasted on this pic supposed to make this image less offensive?

Is It Really “All About the Titties” on National No Bra Day (a.k.a. Metastatic Breast Cancer Awareness Day)?

Though it has been three years since I wrote “Put That Pink Can of Soup Down & Put Your Bra Back On,” and two since it was published on The Huffington Post, it continues to be featured on Facebook pages and in articles and blog posts, etc. around the world and I continue to receive a surprising number of emails regarding the post and its message(s).

There is good news and bad news here.

I’ll start with the positive.

I hope you know how much I have appreciated hearing from so many of you over the past few years.  I need to tell you that while reading through the comments and messages you’ve sent, there have been so many times when I have been deeply moved by the stories and/or kind words you’ve shared with me.

I’m honored that so many of you have taken the time to read and share the post/article. I’ve been stunned to learn how many of you agree with or at least understand/respect my feelings about pinkwashing, no bra days, Breast Cancer Awareness Month, etc.  Because I stand by my message, I’m grateful that my point of view is shared by many other men and women who have been personally affected by cancer and by a surprising number who’ve had no direct contact with the disease. And I’m thrilled each & every time I hear that the post has changed minds and has educated…because it was clear to me that education was needed three years ago.

That being said, I must admit that despite continued positive support for the post’s message, I was wondering if perhaps my words might be too harsh for this October.  I wondered if those of you who might be reading it for the first time would be shocked by it because maybe, just maybe, things had changed so much so that the post wouldn’t have any relevance on 2015’s National No Bra Day and Metastatic Breast Cancer Awareness Day.

I figured that a lot could change in two or three years and I had hoped that the themes of the first article wouldn’t be pertinent anymore.

Did things change as I’d hoped? Did “the Internet” deserve a pardon for cleaning up its act? Could I congratulate the former “No Bra Day for Breast Cancer” offenders for turning things around?

Well, you need only look at the image at the top of this page for the answer.  It took me all of 5 seconds to discover that distasteful National No Bra Day “for Breast Cancer Awareness” or “to support breast cancer?” advertising is still running rampant on the Internet this year.

deal?” you ask.  Well, for starters, National No Bra Day for Breast Cancer isn’t a real holiday. When/where/how did this event begin and who created the first No Bra Day? Good question. The origin is unclear, but as far as a handful of journalists and I can tell, this event was created by Anastasia M. Doughnuts (hmm, sounds like a real name to me!) through a Facebook event page in July 2011.  The first event had ~400,000 supporters, so it was repeated in July, 2012. Then someone had the bright idea to have a second No Bra Day annually on October 13th to piggyback on Breast Cancer Awareness Month and to bamboozle women into thinking that by removing their bras, they would be helping the breast cancer “cause”.  If you ask me, Anastasia was probably a horny guy who was looking to expand his soft porn collection with girl-next-door pictures of breasts.  Well, Mr. Doughnuts, kudos! Your plan worked! And it may have worked better than you expected based on what I’ve seen this October 13th. Frankly, it seems that some of these girls have no intention of making a difference with respect to breast cancer and may just be using “the cause” or the event to share sexy selfies of themselves.

Sadly, the movement seems to be growing.  This pseudo holiday has gone international with an estimated 43,000 participants on the “International No Bra Day” Facebook page alone.

And much to my chagrin, many of the photos I came across when I searched the web using keywords like No Bra Day Breast Cancer were far more risque than the image I borrowed in 2012/13.  I can safely say that some could even be classed as pornographic.  Dare I say it, but I think “No Bra Day” has sunk to new depths this year.

Rather than give the raciest photos any extra attention by posting them here, I’ll tell you that they are easily searchable if you are so inclined.  But I don’t think the people/groups who posted them deserve the acknowledgement of their efforts to make light of and to sexualize breast cancer.

And despite the song & dance on some of the sites that host these images, trivializing and sexualizing breast cancer is exactly what they are doing.

“Boobies are fantastic, we all think so! What better way to express the way we feel, than to support a full day of boobie freedom? Women are magnificent creatures, and so are their breasts. Let us spend the day unleashing boobies from their boobie zoos. Ladies, free your breasts for 24 hours, our perkiness should not be hidden! It is time that the world see what we’re blessed with!
Your breasts might be colossal, adorable, miniature, full, jiggly, fancy, sensitive, glistening, bouncy, smooth, tender, still blossoming, rosy, plump, fun, silky, jello-like, fierce, jolly, nice, naughty, cuddly, sexxy, perky, or drag the ground.”  Not wearing our bras for the day is about “trying to GIVE hope [to breast cancer survivors], ya know?”

Pardon my language, but all I can say is, What the f*ck?

I could go on with this one, but I think there is no need.  You get the picture.

To be fair, this is nothing compared to some of the no bra day for breast cancer pages/posts/publicity I’ve seen in the past 24 hours.

Some of the posts/words/images that surprised me most can be found on Twitter.  I say “surprising” because yesterday was really the first time I had spent more than 5 minutes on Twitter and what I saw is not what I would’ve expected from a very public and mainstream site where teenagers, grandmothers, TV hosts, breast cancer advocates, movie stars, doctors, journalists and just about every other social media user has an account, whether they are in the public eye or just your average Joe.  Naive as I may be, I expected better for this reason.  I know, I know…

The feed for #NoBraDay (a top trending topic all day yesterday) is an enlightening read.  [  <—-  sarcasm] 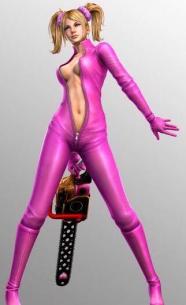 I’ll post this pic from the #NoBraDay twitter feed since it isn’t real. But some of the “real” poses rival this one from the waist up…

I’m pleased to say there are women and men on Twitter who share my stance on the day.  But i’m disappointed to say there are far more who praised yesterday either because it meant they’d get to see naked or braless “boobies, titties, etc.,” or because it meant they could “set their own tatas, girls, boobies, etc.” free and show them to the world if they felt like it.

I won’t lie. Reading/seeing some of these tweets made me dream of locking a handful of these folks in a room with a bunch of topless breastless women (like me) so they could have a little glimpse into at least some of the most obvious possible physical realities of a breast cancer diagnosis in our boob-obsessed world.

I can’t tell you how many perverse comments I read from men and women, how many racy selfies I saw, or how many tweets combined both [like a tweet too provocative to post here — it features a girl’s selfie (including her breasts/nipples and face, etc.) and the words “rape my chest”].  I’m shocked by how many girls were willing to bare their naked breasts in sexy poses “for breast cancer?”

I’ve asked this before, but how the hell could this help anyone with breast cancer and how could it assist with finding a cure or even raising awareness of breast cancer.  If you ask me, these provocative photos and poses do raise awareness of something, but certainly not breast cancer.

I have more to say, more to share, but since National/International No Bra Day has come to a close — and since I’m exhausted — I’m going to wrap this post up.

Before I do, it’s important to tell you that this day, October 13th, is the one day each year dedicated to Metastatic Breast Cancer Awareness.  This should be a post of its own (and I will try to address this important day in a future post), but I think it’s rather fitting that I just have time for a brief mention of it here. Why? Because Metastatic Breast Cancer Awareness Day has once again been eclipsed by “No Bra Day.”

Thinking about how a fake holiday that sexualizes breasts and trivializes breast cancer in the name of advancing the breast cancer cause (whatever that is!) and raising awareness for a serious disease that kills ~40,000 women & men each year should turn your stomach.  But knowing that it almost completely diminishes/overshadows Metastatic Breast Cancer on the one day each year designated for MBC Awareness should make your skin crawl.  Give me a break!  One lousy day granted to educate patients and the public about Metastatic Breast Cancer, to recognize the over 100 women & men who die EACH DAY because of this disease, and to acknowledge those who are living with it 24/7.

So, yes, it seems that National No Bra Day is still “All About the Titties” and not the women attached to them.  No pardons will be granted this year.

I’ll leave you with the photos I included in my “tweeted” response to the #nobraday & #nobradayselfie posts:

Thank you for reading… All my best to you…

13 thoughts on “Is It Really “All About the Titties” on National No Bra Day (a.k.a. Metastatic Breast Cancer Awareness Day)?”